Arrival, KTM. Destination, jet lag. It is 4AM back home in California and 5:45PM here. Yes, there is an extra 15 minute offset of time from the Indian and Chinese time zones. I attribute all typos to that 15 minutes of extra jet lag. This is my third trip to Kathmandu. The third time seeing the pollution, litter, and traffic, hearing the chaos, commerce and commotion of it all. It is also my third time in 10 years seeing its resilience. Kathmandu's government has changed hands more times than I can keep track of. It changed hands while I was here trekking my first time in 2006 with the Mathys, Phelps and friend Ryan and again when I was climbing Everest in 2009 (shout out and love to the entire AAI 2009 Everest team). Maoist extremists changed peoples lives forever with their brutality and perseverance in the countryside. The population of this city swelled from 3 million to 6 million in a handful of years and did not rebound even after the political dialogue greatly improved. The infrastructure is crumbling but power is less intermittent now and life goes on, with a smile. The various incarnations of Shiva temples buzz with tourists and pilgrims. The cremation pyres burn non-stop. The busses and scooters flow in and out on barely navigable streets. Even in the 1000 year old squares that were decimated by the earthquake last year, sacrifices are made for good fortune, monkeys play, businesses pop up to serve the religious and the tourists and friends meet to socialize. They are rebuilding. Tibetan refugees continue to expand their villages in concentric circles draped with beautiful prayer flags around stupas. Buildings go up everywhere, not quite finished. People make a living and game the system wherever they go. If you don't finish your building here, you don't pay taxes on it. So, magnificent temples and shrines are surrounded with rebar and support columns to "add another floor someday".

What strikes me as beautiful and different about all of this madness; political upheaval, and natural disasters. The Buddhists don't just embrace the Hindu traditions, they incorporate and celebrate them. The Hindu, mostly Shiva worshippers around here, people are also just as likely to celebrate the upcoming birthday of the Buddha along with their Tibetan transplants. No one claims absolute understanding of the world around them, they simply listen, contemplate and incorporate. It is a beautiful quilt of philosophies and people; all trying to be happy. It is a lovely place to wander about and eat and drink and trade stories. I have friends here now; favorite places to shop and walk and take pictures. This isn't a home-coming but it is a comfy place to start and end a journey.
Our permits and supplies are gathered, and in two days, we will fly to Pokhara, Nepal's 2nd largest city, 200 miles to the west. It is also only miles from 3 of the highest 10 mountains in the world; Dhaulagiri, Annapurna and Manaslu. If the weather, conditions, people and mountains grant us their grace, we will attempt to climb two of those starting with Annapurna I.
Chris and Lakpa picked me up at the airport and have informed me there are at least two major expeditions on the same route as us as Annapurna and as many as five on Dhaulagiri! Fantastic news! Our base camp team also arrived by helicopter 3 days ago and were spared the arduous task of carrying thousands of meters fixed lines between base camp and the base of the route. The helicopters managed to drop all of the fixed lines for several expeditions right at the base of the route. Also, fantastic news! Tomorrow morning, we will receive blessings from a lama in Kathmandu, do our gear check and make sure I can activate my SIM with the sat modem that my lovely colleagues at ARM have been so kind to take care of for me. Of course, this is great for sending photos and blogs but even more importantly; it allows us to consult with weather forecasters and see pictures of my new, baby niece as she is about to turn 1!
p.s. My brother, Todd, got me started on Ed Viesturs, The Will to Climb, in which describes his own experiences and interest in Annapurna. He gives a great history of the mountain. 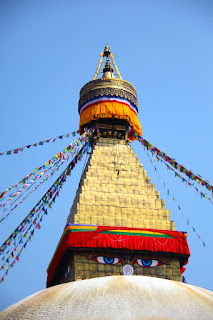 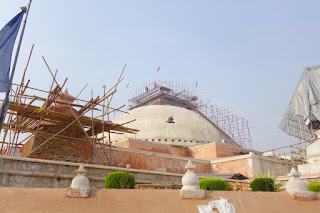 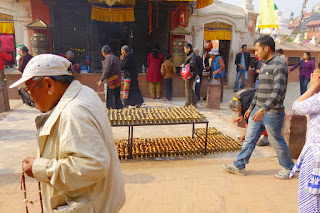